TRUSTSCORE 4.8 | 27323 REVIEWS
Read some of the reviews here.
A fantastic piece of hardware fit and finish is fantastic, one of those knives that you could quite easily let slip under your nose but ohh what a mistake that would be. Total class in every department and as for the price you could easily double it and it still wouldn’t be a let down. As for the service from lamina you honestly couldn’t ask for better the package was very well protected and definitely made to take whatever the delivery service threw at it and still come out as if you had just picked it up from the store yourself (ohh how I wish I could) top sellers of top quality products.
As always. the fastest delivery in europe... Service you can depend on.
I have a bad experience. I ordered a sword replica and in customs, they recognized it as a weapon which was the reason I haven't been able to take it. The package has been returned and I'm not getting answers to my emails for more than 20 days. I would never order from this seller again and that's my advice to you.
A good selection of products at nice prices with a good turnaround time.
Great service
The product did arrive but once in customs, I was on my own. I had to pay £68 pounds importation fee and an extra fee to the delivery company for "management". I ended up paying the cost as I wanted the product and did not know how to "cancel" at that stage. The delivery company treated to apply a daily penalty fee if the importation fee was not paid... very disappointed.
Here I review exclusively the service of Lamnia shop which is basically terrible. Lamnia uses the cheapest and worst delivery companies in Europe, one of this is GLS. After I made an order for 250€ from Finland (Lappenranta) to Swiss (Genève) I started to solve the problem of delivering my item by myself. The GLS company and Lamnia itself started to bombing me with emails to give my correct Address. After many attempts to repeating the same address again and again I got finally parcel in two weeks. But it was not the end of the story. After one month I got a letter from custom saying that I have to pay 50€, because of value-added tax (VAT) (20€), as well 30€ of the penalty because I did not pay it first time. The thing is that on the website of Lamnia there is no information reveal about VAT taxes, what and how one has to do it, or other regulations regarding this case, just you choose the item, add it in the basket, pay and that's it. After paying, you have to figure out the rest of necessary actions by yourself. In my opinion, it is absolutely bad service and attitude to the customers.
Lamnia /
มีดและมีดพับ /
มีด /
กริช Böker Swiss Dagger
Lamnia /
มีดและมีดพับ /
มีด /
กริช Böker Swiss Dagger 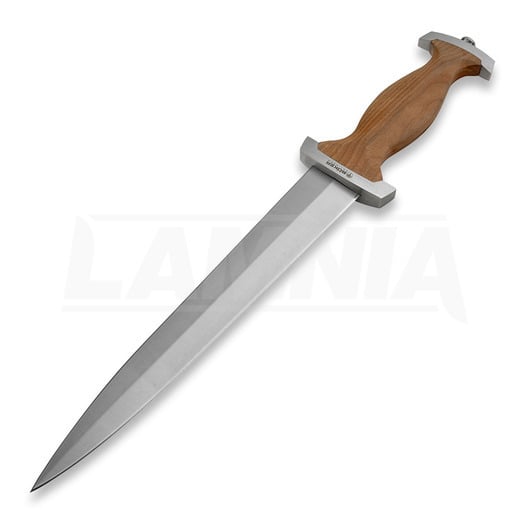 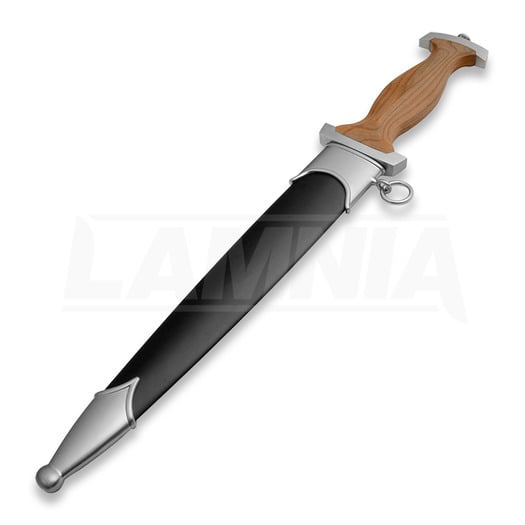 - "Discontinued". The product is out of stock and will not be available in the future. The product page is available for informational purposes only.
ธันวาคม 2022

The Swiss Dagger was a common weapon of the Swiss pikemen in the 15th and 16th century, which often had a middle position between dagger and sword due to its blade length. The dagger, also known as Baselard, was usually not issued as ordinance weapons, but had to be purchased privately by the soldiers and then served as a secondary weapon.

Characteristic of the Swiss Dagger is the design of the pommel and the crossguard. The unusual, curved design can be traced back to the early 13th century and can also be found in the authentic design of our hand-made edition. Handpicked local cherry wood is used for the handles of the dagger, which has enjoyed great popularity since ancient times, especially because of its reddish color.

The dagger blade, sharpened and pointed on both sides, already had a diamond-shaped cross-section in historical models, because this construction proved to be extremely stable and effective. It is made of the classic carbon steel C75 and impresses simply because of its length. The logo and the individual serial number guarantee the authenticity of the knife and stand for consistently high production quality. With elaborate metal sheath. Handmade in the Boker Knife Manufactory Solingen.